What is the importance of visualization in conquering the multitudes?

Visualization is the key that opens doors of conquest and victory in the life of the believer.

Through visualization, you will be able to see what moves and develops in the spiritual world. Peter had the ability to discern the spiritual kingdom, and thanks to it, he was able to recognize the divine nature of Jesus, who told him that this revelation came directly from God Himself.

If your eyes are healthy, your whole body will be full of light.
(Matthew 6:22 NIV)

There are advantages for those who own the key of visualization: 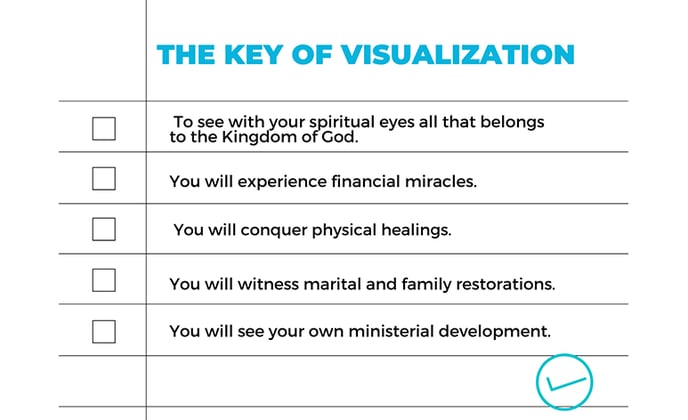 To see into the spiritual kingdom requires spending considerable time in the presence of God. The Lord commanded the people of Israel to meditate on His Word day and night, and to meditate on Hebrew means "to see and confess."
Visualizing is part of our nature: Scientists have been able to verify that what a person manages to perceive in his mind, his nervous system will capture it as if it had already happened and will perceive it as a reality.

I always share the clear example of my daughter Sara: When she arrives at restaurants, the first thing she does is order a lemon. She splits it in two, removes the seeds, and then cuts each half in half. She takes it to her mouth and begins to bite the pulp and absorb the juice.

Let me ask you: what feeling did you have while I was sharing this? Notice how the image of the lemon, when received by the nervous system, produced even a kind of perception of the acidity of this citrus. This example allows us to understand the power that resides in an image. Just when thinking about and visualizing a lemon, without even tasting it, the feeling of acidity occurs.
Visualizing the development of our ministry: As we confirm our call to ministry to the Lord, we must find a way to carry it out as effectively as possible. Many people fail to achieve growth in their ministries because they have never seized it in their minds. They have never visualized more people than they currently lead.

A pastor asked me: "Have you faced the mental barrier of having only a certain number of people, and feeling in your heart that you won't be able to overcome it?" I understood what this pastor wanted to tell me, because I could compare him to athletes who work hard to surpass the mark they set as a goal. I said: My mark for nine years was one hundred and twenty members. And how hard I tried, I never reached it, which led me to renounce the pastorate.

But four months later, God brought a word into my life that changed my ministry: "Dream of a very large church, for dreams are the language of the Spirit. The church that you will shepherd will be like the stars of the sky and like the sand on the seashore, which cannot be counted."

After receiving that word, I was watching the sand on the seashore, and I saw it not like the other times, but I could see how each grain of sand was transformed into a person. I saw hundreds of thousands of people in front of me, and each of them was my disciple. My first goal at the beginning of the church was two hundred people in six months. But thanks to understanding the secret of visualization, after three months we had already conquered them.

When we manage to fill our minds with a clear image of the people we want to win for Christ, we move the angelic sphere so that it may work quickly on our behalf.

In order to develop the Vision correctly it is essential to: 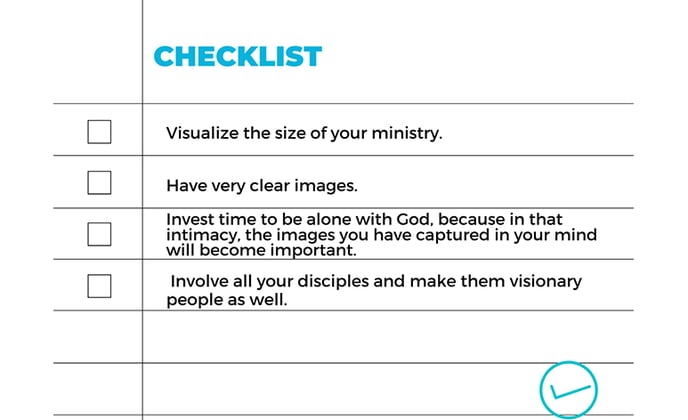 You may also be interested in: What is Vision?